Jennifer Omaitz’s “NEOtectonic” installation was constructed on site over the span of a week. The subject matter draws from geological events of catastrophic and phenomenological tectonic shifts of the Earth’s crust, as well as from cultural trends in urban architecture, graphic arts, and current news media. “NEO” is a direct reference to North East Ohio and “tectonic” is a term that refers not only to building and construction, but also to a discipline of structural geology. Observing how the earth’s crust shifts and moves with changing disruptions creates a metaphor for considering the urban migratory shift of people. How does a city change over time with shifting architectural, cultural, and economic forces? Using the wall as a springboard, Omaitz creates an assemblage of collaged cultural symbols and artifice that confronts the viewer’s space with a visually dynamic network of neotectonic shifts, movements, and interrelationships.  This collected vorticity of industrial prefabricated, invented architecture is a neoconstructivist setting where nature and culture collide.

Corrie Slawson’s mixed media work represents several years of exploring the social and environmental matters of place. Development hierarchies, population loss, questions of environmental equity, and concern with land-use are considered in the context of our region’s lifecycle. Cleveland’s once-gilded age of unchecked wealth and growth is now imperiled with myopic decision-making that is stuck in a cycle of suburban sprawl and urban divestment. The reaping of resources has deep Colonial roots that has served the top percentage of individuals benefitting directly from European hegemony of cultural and wealth accumulation.  The imagery of Slawson’s work emerges through layers of printmaking, drawing, photography, painting, and sculptural installation. The work simultaneously nods to commercial, science-fiction book design and Technicolor TV and film associated with Hollywood’s mid-century portrayal of other worlds. Themes of climate justice are explored in a dystopian present/future using #scifiresearchtrip and #baroqueresearchtrip as loci for revolutionary emergence.

Both artists’ work reflect movement and potential catastrophe, combining elements of the handmade and the found. For Slawson. climate equity is an over-arching theme: climate change directly affects all of us, but there is a lack of justice in political decision-making that privileges comfort for the very few over quality of life for the entire planet. Omaitz looks to weather patterns and structural shifts of the earth’s surface as a metaphor for the jostling disruption and disorienting sense of space that can be found in the urban American landscape. 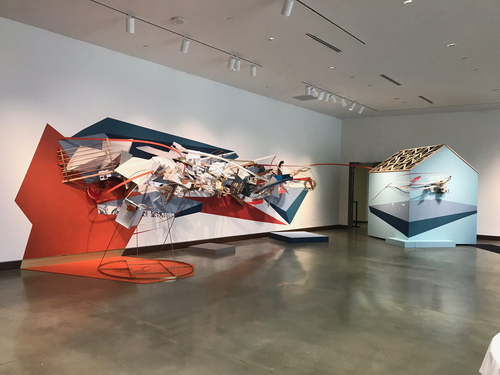